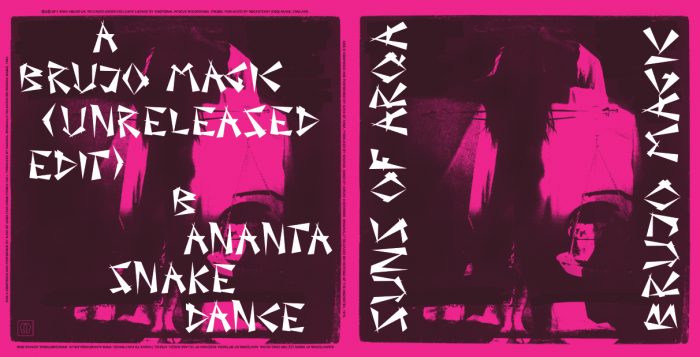 To follow the success of the label’s debut of the Bob Chance reissue, the second release on the label was going to be an interesting one to follow.    So the best way to do that is to go in the opposite direction and dig up two early cuts from ethno-dub band Suns of Arqa.

As the late 70′s British reggae scene found kinship with and fully embraced punk’s attitude, aesthetic and experimentation pushed further in to dub’s realm.   Led by the enigmatic Wadada, the Suns Of Arqa were at the forefront of this new sound.   From 1979 to 1983 SOA released a series of now classic albums, mixing dub rhythms within Raga structure and principles, and it is from these period that we draw the tracks for this EP.

Included in SOA’s ever floating line-up were legendary Prince Far I, on what proved to be his last recordings before his untimely demise, and also, a then young up-and-coming producer called Adrian Sherwood to provide mixing duties.

Remastered especially for this release Brujo Magic sees Prince Far I laying down his inimitable vocal style over a driving disco-dub groove.   When first talking with Wadada on which version to reissue he sent us an unreleased version, that while only 3 minutes long, had a drum and bass rhythm that had more punch and groove that the original album version.   Realising this should be the basis of the reissue meant creating an extended edit ourselves.

Backed with what has become something of a Balearic gem for many underground DJs, Ananta Snake Dance appears here in it’s original long format, pressed loud for the first time on 12″.