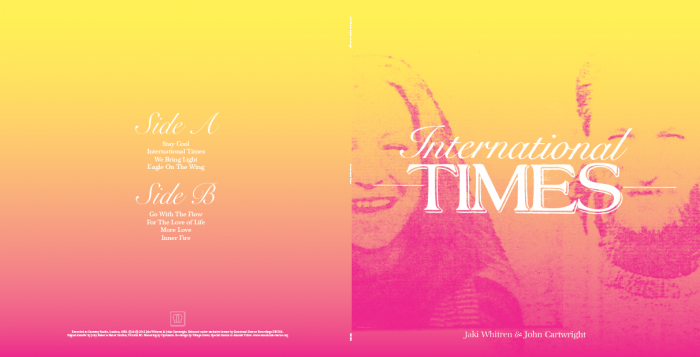 For our 3rd release we jump out of sequence to ERC004 and our first album – the lost folk-soul-jazz classic International Times.

This really is a truly inspirational album and story.    Recorded full of hope following Jaki and Johns’ relocation from the hippy-haven of late 1970s Glastonbury to a rural commune in France, their dreams are expressed over the original 8 soul-jazz wrapped songs that first appeared in 1983 on vinyl.

After finding limited success as artists in the major-label dominated world of the corporate 1970s – Jaki, via a solo LP for Epic and as backing singer for Alan Parson and John, as a respected session musician – decided to literally break free, physically and mentally, from their past and start a new life with their young family and friends in tow.

The timeless lyrics and heartfelt optimism within are manifest to their dreams and lifestyle beliefs and offer a beautiful encapsulation of the choices deep down we should all share.

Moving out of their folk background they, accompanied on drums and keys by their young sons, matched their newfound (and at times pop) lyrics within a Soul-Jazz melting pot.

The subsequent Privately Pressed album may have become a lost classic amongst the new wave sounds of the early 80s, but 30 years later it’s dreams and uplifting hopes within are as profound today as their intention all those years ago.