While many of the great Krautrock bands and albums had come and gone by the end of the 1970s, the new decade and it’s increasingly post-industrial landscape, led to changes beyond culture and politics.

Alternative ideas and structures were becoming increasingly influential and pushing boundaries in fashion, art, film and music.   At the Stollwerck complex in Köln, a mixture of arts centre and squat, the bluring of artistic boundaries created a culture of openness, inclusion and collaboration.

It was here that Dunkelziffer was formed out of the embers of several bands now considered classics of their ilk, The Phantom Band and Can.   Based around the core-members of Dominik Von Senger, Reiner Linke and Helmut Zerlett, the ideas of a traditional band were disposed and all writing and decision-making came from a collective that numbered over 20 artists across it’s lifetime.

In that the music they created also merged ideas, from jazz to punk, so that no defining sound could be pinned on them.    With each album the band developed and while the heavy drumming so associated with Krautrock was prevalent, it was often as a backdrop to the myriad of styles and melody they sought to explore. 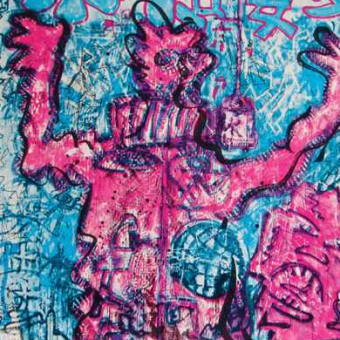