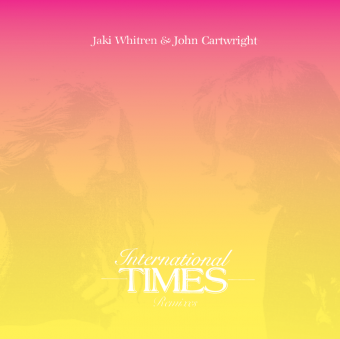 When starting the label the goal was to reissue lost, forgotten or obscure music as a modern archive.   There was no plan to ever remix or update the music and package it in a new light for today’s collectors.

However, for International Times and the fact the whole project had started after hearing Al Usher’s edit a few years earlier, it seemed that this was the time to bend those rules and make such decisions release-by-release

Initially planned as just a release of the edit, Al – with long term production partner Ewan Pearson on desk duties – returned to the original track and came back with a totally new and uplifting remix and dub of Stay Cool that will go down well on boat parties across the Med this summer.

At the same time, after hearing the unreleased live solo vocal from Jaki that is This Time, Al also asked if he could also do a remix and who are we to say no.   The result is possibly the best cut of the release, treating Jaki’s soul-tinged acapella with the utmost respect to let its wonder shine before taking the track deep down in to the Berlin night for the finish.

Finally we turned to Times-Dub and the remix from Aphophenia.  Essentially a dub of International Times that appeared on the flip of the frightenly rare extended 12” EP from 1983, the in-house studio team take the originals relentless and oft meandering drums of son Joby and overlay John’s own bass to give it more impact, while spreading a little magic of the Space Echo across Jaki’s refrain for good measure.   This is pure discoid.

Together this modern EP stays true to the uplifting feeling found through the original songs, but bring them right up to date and give a great expression of Jaki and John’s music some 30 years after they originally appeared.