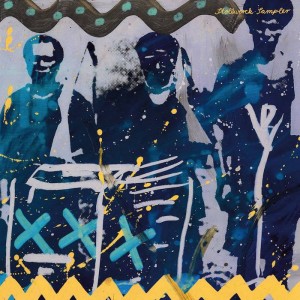 Based within the disused industrial warehouses spaces of Stollwerck, a mix of post-hippies, punks and anarchists created a community within that fed off each other’s artistic endeavours. While given space rent free, a requirement for the musicians centred around Dunkelziffer, The Phantom Band and The Unknown Cases, was to provide a collection of music for release on a compilation album to highlight its work.

Released in 1985, the “Off Record No.1 Stollwerck Sampler” LP contained a collage of post-punk, krautrock, dub and avant-garde music and here on this special 6 track 12”, a condensed Stollwerck Sampler EP is presented some 30 years later.

Starting with the almost undiscovered Memo Walk by The Unknown Cases (see EES016), here they eschew their afro-cosmic sound and turn in a deep jazz fusion funk jam that wouldn’t look out of place during Miles’ “On The Corner” period, except with a krautrock metronomic kick.

One of the challenges of this Sampler was what to leave out. The tracks that make up the rest of the EPs first side highlight what the project was really about. The one-off Project X and Dominik Von Senger’s wonderful solo piece, Track Of Sample, are the sounds of a collective in full hair down, experimental productions where all is thrown in to the melting pot and see where this goes.

The second side is more of the same and could easily of appeared on the Dunkelziffer “Retrospective” (ERC007/8/9) reissues. However, this shouldn’t be dismissed lightly. This is mesmeric music that captures a time and place perfectly. Whether Die Art or A.N really ever existed beyond this studio concept is irrelevant. The Stollwerck Sampler EP captures that moment, for this moment.